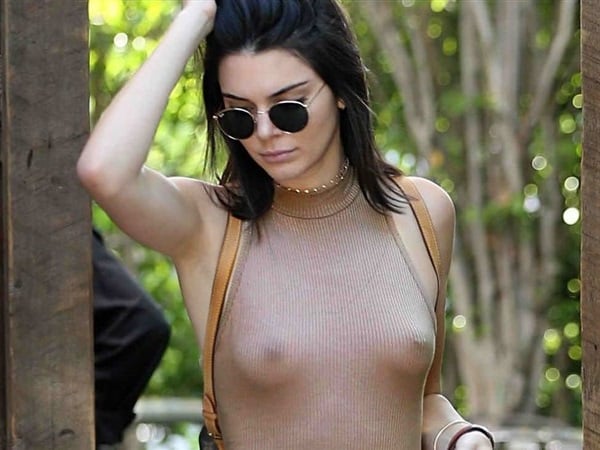 Kendall Jenner flaunts her perky tits and hard nipple pokies while braless in a tight see through dress in the photos below.

Kendall is the one member of the Kardashian/Jenner band of gypsy whores who appears to not overly inflate her sex organs with injections of fried chicken grease and watermelon juice to attract the dirt skin nig nogs. However, to try and keep pace with her degenerate siblings Kendall often does expose her erect tit toppers in see through outfits like the one in these pics.

Thankfully the problem of Kendall’s nipples is easily solved, for once she is put in a thick black wool burka she will never again be able to offend our pious Muslim eyes with her high beams. Of course in the extremely unlikely event that the burka is unable to fully contain Kendall’s engorged areola, a few swings of a sharpened scimitar will take care of the issue… permanently.