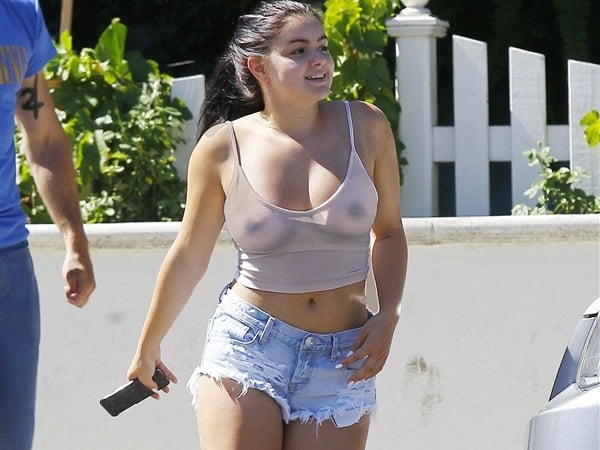 18-year-old “Modern Family” star Ariel Winter tries to seduce two older men with her braless bulbous boobs in a see through top, and thick meaty thighs exposed in a pair of daisy dukes in the photos below.

Ariel Winter appears to fake car trouble to get the attention of these men, and then proceeds to flaunt her teen titties and finger her cooch through her short shorts right in front of them in the hopes that they will give in to her feminine wiles and agree to spit roast her then double penetrate her stink holes.

Sadly for Ariel Winter like nearly all infidel men these two guys were limp dick homoqueers. Rest assured that if Ariel was lucky enough to stumble upon some Muslim men, they would have immediately bent her over the hood of her car and vigorously pounded her every orifice… Then they would toss her into the gutter like the piece of trash that she is, and drive off with her vehicle.