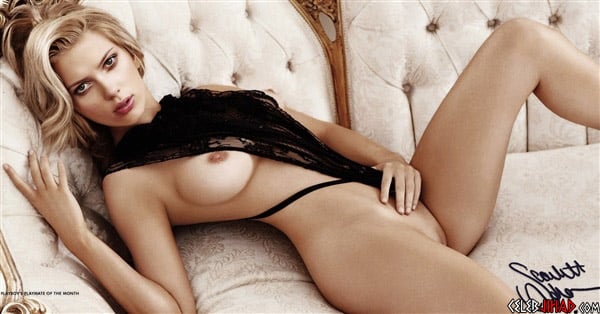 The photo above is reportedly a leaked preview of Scarlett Johansson’s much anticipated nude photo shoot with Playboy magazine.

With a mainstream magazine like Vanity Fair publishing a photo of Demi Lovato’s butt hole earlier this week, Playboy is now in a difficult position were they are no longer depraved enough to compete with the filth in popular culture, but are still stigmatized as an “adult” publication and kept off of grocery store checkout shelves.

Unfortunately for Playboy this Scarlett Johansson nude photo is not nearly raunchy enough to satiate the degenerate appetites of the infidel public. The bar has been lowered significantly in recent years and so if Playboy wants to stay relevant then they must get with the times, and that means that at the very least they need to take some photos of Scarlett Johansson gaping her ass hole. However, if Playboy wants to really regain its reputation as the premiere peddler of printed smut in the West, then they are going to have start publishing photos of girls getting gang banged by black guys… starting with Scarlett.