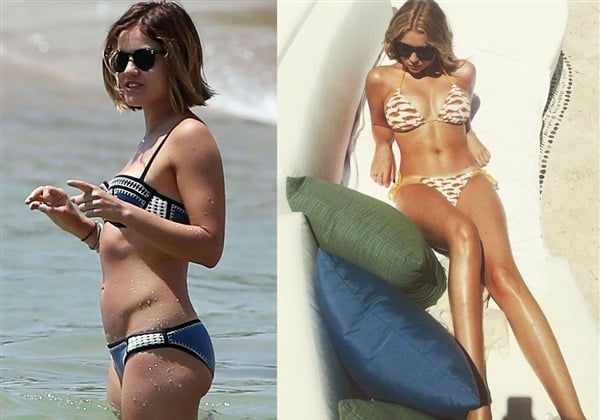 “Pretty Little Liars” co-stars Ashley Benson and Lucy Hale were both photographed showing off their shameful female bodies in bikinis for the 4th of July weekend.

The great Satan of America is celebrating its Independence Day this weekend, and there is no more fitting tribute to the depraved land then seeing Ashley and Lucy in their bikinis. For the US of A is an oppressive totalitarian state which uses its army of degenerate celebrity females (which includes Ashley and Lucy) to control its masses, and inflict harm upon Islam and the teachings of the blessed Prophet.

As you can see in the Ashley Benson bikini photos above compared to the Lucy Hale bikini photos below, despite sharing top billing on “Pretty Little Liars”, Ashley is the far greater talent. In fact, Ashley’s immense talents nearly spill right out of her bikini top, while Lucy’s pathetically piddly talents barely fill her bikini top up. No doubt the show’s producers would be wise to showcase more of Ashley, and cut back on the scenes with Lucy in them.