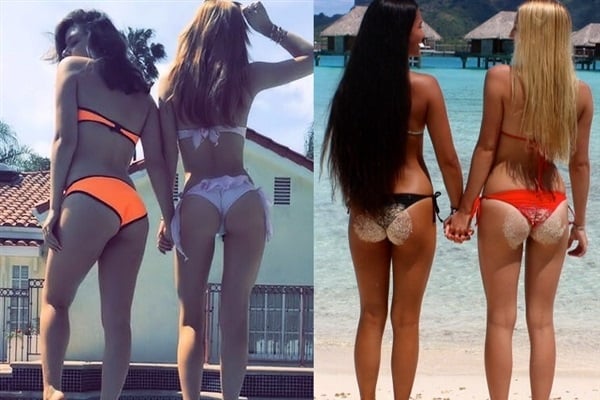 Like most infidel 17-year-olds, actress Bella Thorne and Heather Locklear’s daughter Ava Sambora spent the Easter holiday weekend sharing photos on social media of their taut nubile nearly nude bodies in thong bikinis while dyking out with a friend. Clearly there is a real rivalry between Bella and Ava, as each girl tries to use their teenage ass to draw attention to their sinful lesboqueer behavior.

Of course this sort of degeneracy should come as no surprise, as at 17-years-old both girls are now old maids unfit to marry a Muslim man, so they completely lack purpose in their lives. If Bella and Ava’s parents had done the right thing and sold them off 7 years ago when they were in their primes we wouldn’t be seeing these brazen thong bikini pictures today, for as the Qur’an states, “idle teen girl ass is the devil’s workshop”.

But alas we don’t have the luxury to lament what could have been, as we are now confronted with Bella and Ava’s thong bikini pictures and they must be thoroughly examined and renounced. First up is Bella Thorne’s pics and as you can see, despite her advanced age her anus remains remarkably tight. Her girlfriend on the hand could use some toning up. A few months pulling the plow in the fields should do the trick.

Now let us look at Ava Sambora’s thong bikini pics. As you can see the setting is much more pleasing as Ava is in Bora Bora near the beautiful Muslim caliphate vacation destination of Maldives. Also Ava’s native girlfriend has a halal body, which she no doubt developed scaling up palm trees in search of coconuts.

It is certainly hard to declare a winner in this Bella Thorne and Ava Sambora thong bikini battle, so I will declare both of them losers. For any girl who misses out on the unimaginable pleasures that come from serving a powerful Muslim husband lives an empty shell of a life.