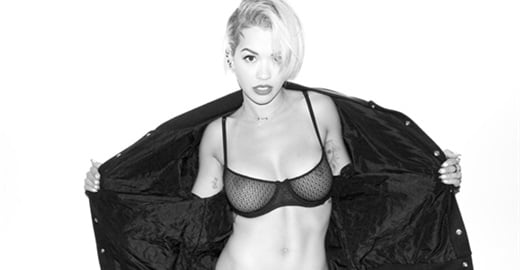 Rita Ora is a mongrel British pop star and actress who loves nothing more than showing off her shameful bulbous titties and brownish nipples in see through tops, as you can see in the compilation of photos below.

Rita is very popular in the UK, however much like the Queen, soccer, and tickling little boys’ anuses with ostrich feathers she has not developed much of a following in the US. However, that may be about to change as Rita Ora will be playing Mia Grey in the new “Fifty Shades of Grey” movie, which is based on the perverted best selling novel.

If there is one thing the degenerate American public can not resist (besides all you can eat buffets) it is half breed whores, with big tits, that have kinky sex on film. As you can in the photos below, Rita Ora already has two of the three down, and she is now just a few short months away from having it all, as she will no doubt get banged hard on the big screen when “Fifty Shades of Grey” hits theaters February 13, 2015.