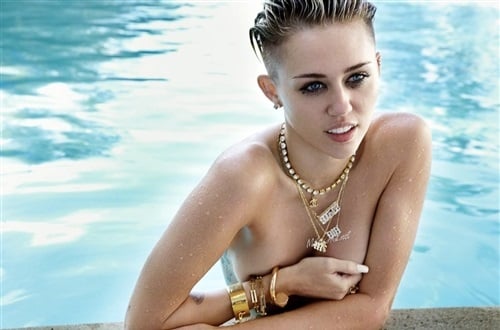 I am happy to report that Miley Cyrus is alive and continuing her depraved Jihad against the infidel West by posing topless in a swimming pool in these outtake photos from Rolling Stone magazine.

We reported last week that Miley was decapitated by Kristen Stewart on orders from Hollywood’s Zionist cabal (source). However, we now know that the severed head in the photo belonged to homoqueer rapper Mackelmore, and not secret Muslimina Miley (an easy mistake to make).

In fact Miley Cyrus probably beheaded Mackelmore herself for daring to look like her and turning the once righteously masculine rap music into a platform for liberal faggotry.

Yes as you can see in these poolside topless photos, Miley Cyrus is back and degenerating Western culture better than ever. Praise be to Allah!