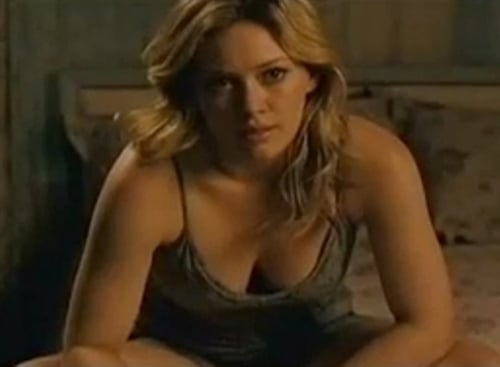 Actress Hilary Duff released the above photograph for the instructional purpose of teaching infidel girls how to sit.

In Western society women are expected to prostitute their bodies at all times and in the basest manner possible. As an actress in Hollywood Hilary Duff is an expert on selling herself, so she has taken it upon herself to teach the next generation of infidel whores how to sit.

As you can see the proper sitting posture for an infidel woman is with her legs spread wide open, so that the diseased stench on her rotten crotch will attract the infidel men. As Hilary shows, it is also beneficial to bend over slightly exposing cleavage, so that the intention of “eager to breed” is clearly conveyed.

This picture of Hilary Duff teaching Western girls how to sit provides fascinating insight into the degenerate infidel culture, and serves as a sobering reminder of the immorality that women are capable of without the strong guiding hand of Islam. Allahu Akbar!