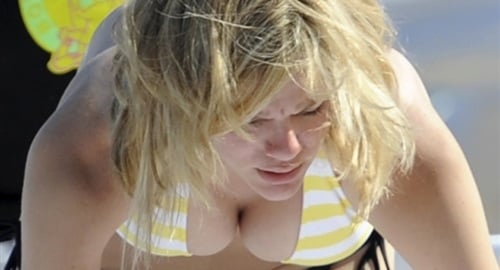 Just as the Kelly Clarkson swimsuit pictures we posted earlier today represent the American aesthetic, these pictures of Brooklyn Decker in a bikini illustrate what us Muslims consider to be a pleasing woman’s body (of course her body should be peppered with hair but this is close enough).

Though Brooklyn Decker may have the body of a Muslim woman, she lacks the moral decency. It is never OK for a woman to wear a bikini, for the female body is shameful and an abomination in the eyes of Allah.

Brooklyn Decker needs to learn that even though she is not attractive to Americans because she is not an enormous fat ass with cellulite, it does not mean she can prance around in public mostly naked.

Not only do these bikini pics show a complete lack of respect for Allah, but they also may cause lustful urges in the loins of pious Muslim men which is forbidden under Sharia law. Unless Brooklyn Decker wishes to face a morality hearing I suggest she trade in this bikini for a burka immediately.