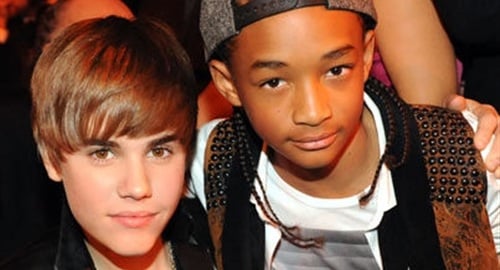 Teen pop sensation Justin Bieber is being romantically linked to yet another young star, actor Jaden Smith. You may recognize Jaden Smith from starring in the remake of the Karate Kid movie, or as famous actor Will Smith’s son. You may recognize Justin Bieber as the sexually ambiguous singer from Canada or as washed-up R&B star Usher’s meal ticket.

According to witnesses Justin Bieber and Jaden Smith were seen getting quite “cozy” in a private both at the Dave & Buster’s on Sunset. The love birds then continued their date at a Go-Kart track in West Hollywood, but were asked to leave when Jaden kept ramming Justin from behind… with his go-kart that is.

With Valentine’s Day fast approaching it will be interesting to see if Justin Bieber and Jaden Smith take their relationship to the next level and make it official. We’ll definitely be keeping an eye on this possible young Hollywood “it” couple.