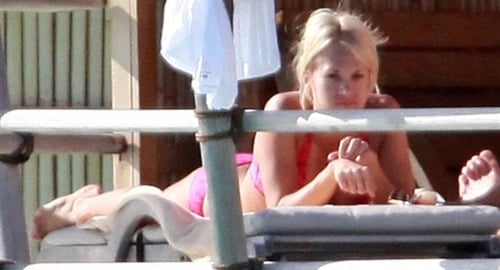 Well we called it. Mike Fisher’s new wife Carrie Underwood is nothing but a cheap tramp, and she is unfit to be a wife.

These latest pictures of Carrie Underwood in a bikini prove once and for all that she a no good floozy who brings nothing but shame to her husband by going around flaunting her nearly naked body.

I feel sympathy for Mike Fisher. My cousin Amir was in a similiar situation with his 3rd wife. Amir had suspicions about her purity, but he went ahead and purchased her from her father anyway. Well unfortunately Amir’s suspicions were confirmed when he caught her showering sans Burka and completely nude like a total whore. Amir did the right thing though, he burned her face with battery acid and returned her to her clan.

Now it is time for Mike Fisher to make that same hard choice. He has obviously been duped into marriage by the slut Carrie Underwood. I suggest Mike Fisher performs a light stoning followed by a public shaming were he drags Carrie Underwood by her hair through the town to return her to her father.

Here are the new Carrie Underwood bikini pictures, so the world can see what kind of tremendous slut poor Mike Fisher is dealing with.