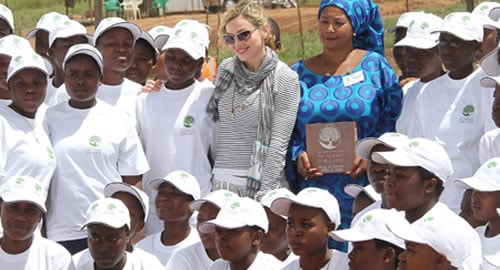 She is named after the mother of God, but to the 75 workers at this sweatshop in Botswana, the “Material Girl” is anything but. Here at this dingy factory 25 miles south of Orapa, pop-icon Madonna forces men, women and children to work in deplorable conditions for little or no pay.

“When I arrived at the camp, I was given a copy of Madonna’s album, Hard Candy,” said Ian Lekoa, a former employee who escaped from the camp last month. “At the end of the month, they told me I owed $35 dollars for the album. I could not pay, so they beat me and made me work.”

Added Lekoa, “It was a horrible album.”

Madonna, who is said to personally oversee the camp via web cam, has also made several visits. She reportedly enjoys flogging workers who can not name her most recent albums.

“She ask me my favorite album, and I says to her, I say I love the Like a Virgin,” said Ashleigh, a young woman who worked at the camp until gangrene took her hands. “Then she say to name her a recent album, and when I couldn’t, she beat me with reeds until me passed out.”

Madonna is currently working on her new album, “Like a Virgin II: The Search for Curly’s Gold,” and was not available for comment.