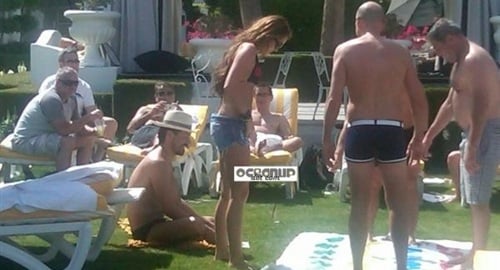 Miley Cyrus was busted playing Twister in her bikini with a group of fat sweaty topless old men.

Have you ever even asked yourself how someone with no talent gets to star in movies and TV shows? Or how a girl who’s voice sounds like a dog yelping after it’s tail gets stepped on gets a recording contract? These pictures of Miley Cyrus in her bikini with a bunch of middle-aged rich guys is your answer.

Hollywood is a nest of whores and perverts, and these pictures of Miley Cyrus “auditioning” for God knows what role prove that. More deals are made in hot tubs and bedrooms than in boardrooms. “Transformers” director Michael Bay admitted that he only cast Megan Fox (and basically launched her career) after she agreed to wash his Ferrari in a bikini. Ferrari being an obvious metaphor for taint.

Miley Cyrus will do anything to stay famous and relevant, and the only way she can do that is if she is supported by the perverted Hollywood money trust. Miley is not above stripping down for them and playing Twister (a game which only purpose is to allow guys to feel up any female participants). You are extremely naive if you think your favorite Hollywood starlet or hunk is not participating in the same sort of perverse sex games.