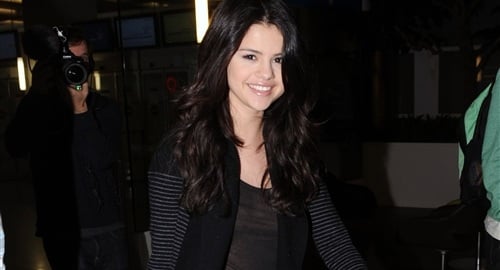 Selena Gomez fulfills her Disney contract by continuing her campaign to corrupt the world’s youth.

Just look at Selena waltzing through an airport in a see through shirt. I doubt she was even stopped and given a rectal exam like I am when I fly, and I wear a bulky overcoat and a turban. Tell me how that is fair!

Selena Gomez is obviously a corrupter of the minds of children. She’d probably be happy having all our kid’s running around naked, doing all sorts of drugs, and committing hate crimes on the elderly. Shame on you Selena for being such a poor role model.

I thank Allah everyday that I had the wisdom and foresight not to allow my children to watch the Disney channel, and instead get their entertainment from copying passages out of the Koran.