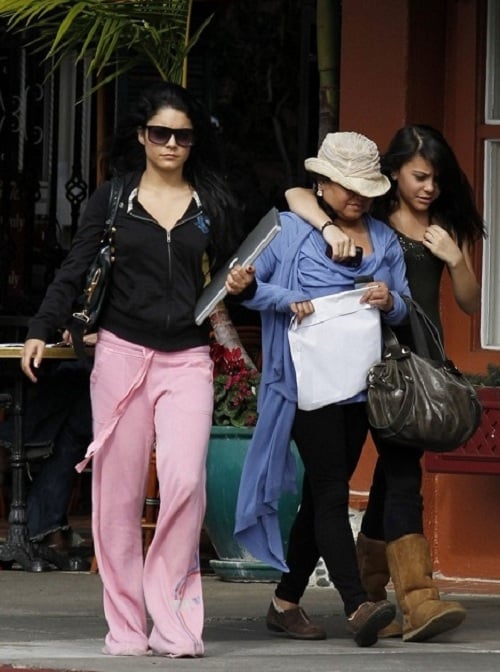 With Hollywood still reeling from the news that the Jonas Brothers molested a fat man at the beach, now comes word that Vanessa Hudgens has attacked an elderly woman outside a trendy cafe.

Vanessa was leaving the cafe with her evil henchman known only Nick Nack when the pair came upon the helpless old woman carrying a laptop. As the picture above clearly demonstrates, the two thugs quickly pounced on the woman, with Nick Nack attacking her from behind as Vanessa ran off with the laptop. The old woman was later taken to the hospital and is currently in critical condition with a broken neck, hip, and pelvis.

Why Vanessa Hudgens, with all of her money, would choose to attack and rob an elderly woman is beyond comprehension. Psychiatrists speculate that Vanessa may have been jealous of the media attention being paid to the Jonas assault, and this was simply her way to one-up the brothers. Whatever the case may be, an epidemic of violence is sweeping young Hollywood. Authorities would be wise to begin randomly flogging these entertainers before the behavior spreads further.