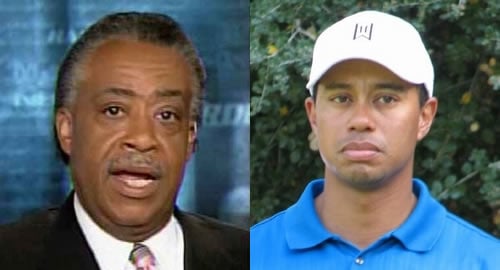 The Rev. Al Sharpton held a press conference today to blast Tiger Woods for the lack of diversity among his mistresses. Sharpton claims that the lack of African-American women among Woods’ harem will have a negative effect on the black community, specifically young black girls.

“Why is it that a man who calls himself black can’t bring himself to cheat on his wife with a black woman?” said Sharpton, speaking to a group of supporters in Harlem. “What does it say to young black girls everywhere when you pass them over? Shame on you, Tiger Woods. What would your daddy say?”

Sharpton, who has long championed taking black women as mistresses, said that today’s black athletes need to stop neglecting black women when it comes to extramarital affairs, and should follow the examples of positive black role models such as Jesse Jackson and Martin Luther King, Jr., both of whom cheated on their wives with black women. Sharpton also stressed that cheating with African-American women would help the black community financially by giving black girls the chance to sell their stories to tabloids and gossip magazines.