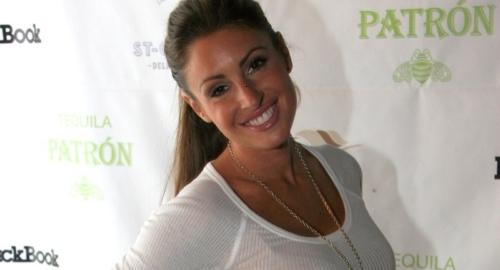 Furious that another whore woman is trying to steal her thunder. Original Tiger Woods mistress Rachel Uchitel is now claiming that she did in fact have an affair with Tiger Woods and that it was her that Tiger and his wife Elin were fighting about not Jaimee Grubbs

According to Rachel, less than an hour before Tiger’s accident, her and Tiger were texting each other. Elin confronted Tiger, grabbed the phone, and called Rachel to confront her.

After first denying that she and Tiger ever even met (you know until her lawyers can work out a large fee for the story) Rachel is changing her tune, as slut after slut have started to come forward with stories of getting railed by Woods. She released this statement today*,

“I can no longer stand idly by while people take credit for my great accomplishment. I am Tiger’s top f*ck slut! He’s told me so on numerous occasions! No girl has garbled his marbles nastier and with more enthusiasm than me. So let the record show that I am the biggest home wrecking whore. God bless!”