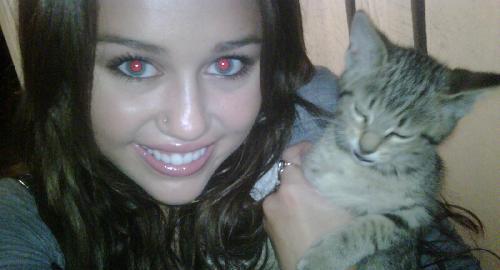 Miley Cyrus’ biggest fan made good on her threat to eat her beloved cat “Fuzzy” if Miley did not go back on Twitter.

In detail the Miley Cyrus fan describes how she took Fuzzy to the vet and had her euthanized on Monday, before frying herself up a nice cat meal.

“I then fried the meat in a pan with olive oil, added some salt and spice flavoring and put it on a plate with some celery and green onions. For a drink I had Mountain Dew.”

I like this girl’s style. She made her demands and when they were not met she carried out on her threat. I think my fellow terrorists could learn a thing or two about balls from this young lady. However, I do have to question her methods. Eating a euthanized cat is disgusting! She should have stomped the cat to death. It helps tenderize the meat!