I have a bone to pick with…Oprah Winfrey

Welcome to the inaugural edition of B. Rock Hussein’s column, A Bone to Pick.

B. Rock, is a man about town who isn’t afraid to share his opinions.  By “about town” we mean the employee lounge at the South Shore Care Center in Oxnard, CA, where he now works as an orderly.  By opinions we mean whatever he was able to piece together from watching TMZ, The O’Reilly Factor, and Countdown with Keith Olbermann.

Rumor has it that Oprah Winfrey offered to produce Barack Obama’s half-hour television special which will air simultaneously on CBS, NBC and FOX. She even offered her studio space for the broadcast.”She’s been begging Obama to let her help,” a source told the Drudge Report.Considering the show airs tonight, it’s safe to say that Mrs. Winfrey’s services were not needed.  I feel inclined to ever so subtly “fill Oprah in” on the reason Obama turned down her generous offer. 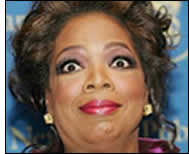 Did she seriously think that Obama would allow her, a black woman, to come in on the final leg and expose his own blackness?

Just take a look at the numbers. According to the latest daily Gallup poll, Obama leads McCain 50% to 43%.

Let me translate that for you; 50% of registered voters believe that Obama is white. Now is not the time to rain on that parade.

Furthermore, the ever eloquent Obama has used his powers of oration to convince 10% of registered voters that McCain is, in fact, black.  He has convinced 70% of black voters that McCain is white, and the remaining 30% now believe McCain to be some sort of Puerto Rican fellow who is trying to sleep with their underage sister.  Perhaps most importantly, he has convinced 97% of all Puerto Rican statutory rapists that Sarah Palin is an adorable, but retarded, wolverine.

At this point in the game putting Oprah next to Obama would be political suicide.  She might as well offer to have Jesse Jackson direct the special, put Al Sharpton behind the camera and have Reverend Wright hold the sound boom. Only in America!

The point is Oprah should stick to what she does best; redistributing her wealth to her lazy ass, out of work studio audience.

Thanks but no thanks, Oprah. Consider your bone PICKED!

The opinions expressed in this commentary are solely those of B. Rock Hussein.